VR360° Aerial Video by Drone in Marseille and South of France

2019 greetings with this VR 360 aerial video in 5,7K, filmed by drone in Vercors mountains, France

360-degree video is more and more widespread on social networks and the Internet thanks to, among others, the "players" set up for free by Youtube, Facebook or Vimeo, which immediately won over the public who can easily visualize these new contents on a tablet, smartphone, or computer. 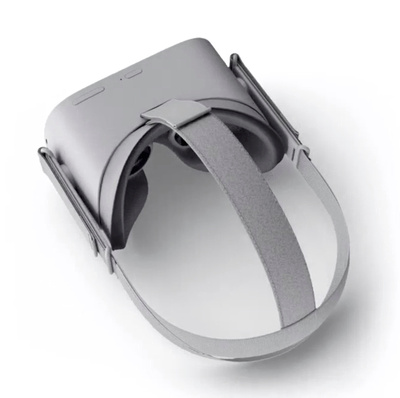 But the Must, remains the really immersive broadcasting in a VR headset, such as the Occulus Go, our favorite because it displays beautiful images, while being autonomous, easy to use, and affordable (220€)!

By appointment at your premises (Marseille and surroundings), we can demonstrate what such a helmet brings to the 360 experience, especially if it is an aerial film: a sensation of weightlessness guaranteed.

An unforgettable moment for all the people having lived it!

Everything seems to come together for you to produce your 360° video.

Stand out from your competitors now by offering your customers a whole new way to see the world in 360 degrees!  Few companies offer it at the moment, especially by drone, all the more reason not to wait! 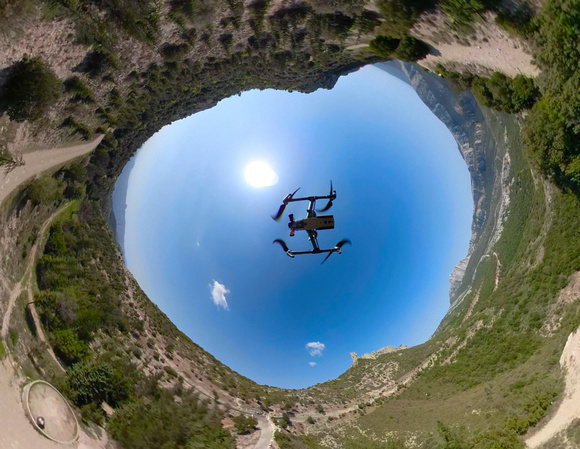 As far as aerial photography is concerned, we offer reliable, low-cost solutions that enable 360° video footage to be taken by drone, whether in an urban environment or in uninhabited areas, without any particular regulatory constraints.

Whether a drone Dji Inspire 2, a Phantom 4 pro or a Mavic 2 pro, we opted for a lightweight and high-performance camera that can record video in HDR, at a resolution of 5.7 K at 30 frames per second! 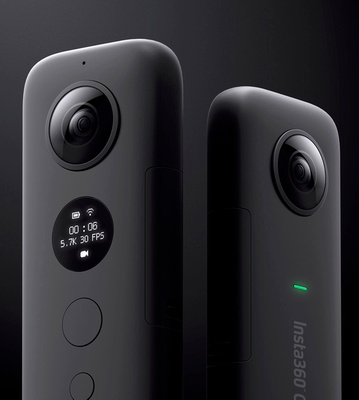 With our Insta360 One X camera, we can easily and quickly capture 360 panoramic aerial images in all of France's city centers, without compromising on quality or stability. Given its low weight, it can be used under our three DGAC-approved UAVs to fly in populated areas (scenario S3), as shown below in Aubervilliers.
. 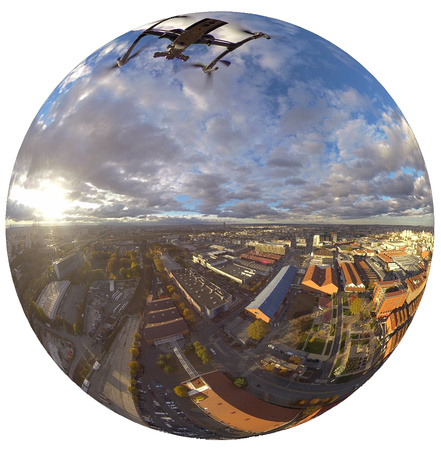 Thus, Drone-Pictures, a company providing aerial services and audiovisual production, offers you the choice of the simple service of 5.7K 360 shots, or the realization of your film from A to Z in Virtual Reality 360.

A film of presentation of the company, or a clip relating an event, a product launch.

Whatever your objective, the important thing is always to tell a story that has real meaning, not to use new techniques for fun. 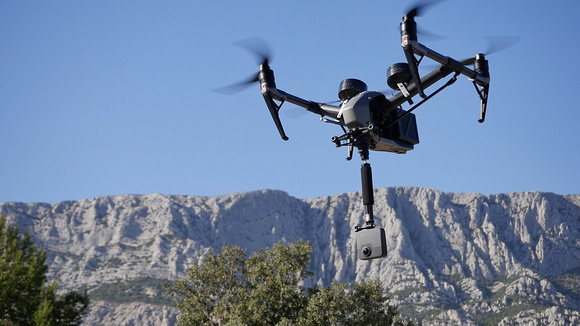 For your next 360 video production, we'll take great care to bring you the most beautiful panoramic images so that your video clip has a greater impact and a much better relay than a classic video.

We work all over France, but especially locally, in Marseille and the PACA/South region which we have known particularly well for so long. Our images and films are always made with our teams, our drones and our cameras.

We also offer film production in HD/4K/6K video as well as the realization of very high resolution photographic Giga-panoramas and the shooting of your events live by drone streamed on the internet. 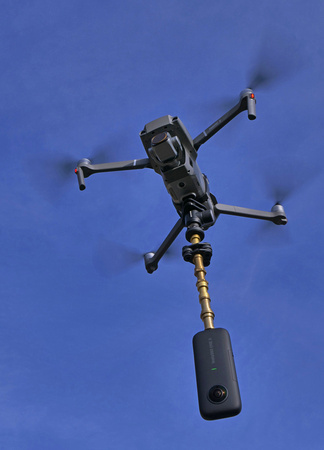 Because of our flying platforms and the camera used, the 360 aerial video capture at Drone-Pictures, does not cost a penny more than our shooting services in classic HD or 4K video!

Our hourly, half-day and full-day packages remain the basis of the pricing of your service, the total amount of which will depend, as usual, on the type of UAV put in flight, administrative procedures and travel expenses. Please note that on some UAVs, we can record simultaneously - during the same flight - in VR360 and classic HD/4K!

Drone-Pictures offers not only aerial 360° video shooting by UAV, but also on the ground, indoors and outdoors, with optional film production/conception, editing, titling, dressing and audio mixing: i.e. we are able to deliver you a finished product. And if the 5.7K is not enough for you, we have partners to offer you the VR360 in 8K.  Don't hesitate to consult us whatever your need, we will find the best solution.

Drone-Pictures offers not only aerial 360° video shooting by UAV, but also on the ground, indoors and outdoors, with optional film production/conception, editing, titling, dressing and audio mixing: i.e. we are able to deliver you a finished product. And if the 5.7K is not enough for you, we have partners to offer you the VR360 in 8K.  Don't hesitate to consult us whatever your need, we will find the best solution

About the technique of UAV shooting in 360 ° VR aerial video ?

Today, the shooting technique must be both aesthetic and precise. But what we are looking for above all is to offer an experience to the person who sees the video. The spectator must really dive into the film and have the feeling of being on the spot. To do this, professionals use the technique of shooting with a drone in 360 ° VR aerial video. 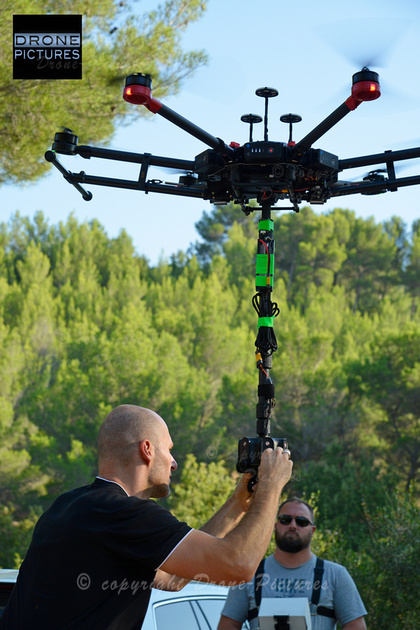 Since the arrival of professional UAVs on the market, the production of aerial plans has become more accessible to all sectors of activity. Immersive video makes a considerable contribution, as it provides a more detailed and realistic view of the environment filmed at 360 °.

The production of a 360 ° VR aerial video with UAVs

This type of shooting first requires drone piloting skills. It requires smooth and precise piloting. The drone is very often close to the filmed subjects.

The skills required to produce an immersive video

To make a good 360-degree virtual reality video, it is not enough to have the right equipment and the technical skills to handle it. You also need the skills to make and edit video. It is a meticulous work that also requires creativity and a sense of aesthetics, as well as a lot of experience to avoid the pitfalls of this kind of shooting.

Here is a new format that is becoming more and more common in our world: 360-degree videos are now easily viewable on Youtube or Facebook, which considerably broadens the audience. And the market for VR headsets, which offer an immersive broadcast, is exploding. Everything seems to be in place to finally move to 360 production in Marseille, in the Bouches-du-Rhône and in the Provence and South Region! 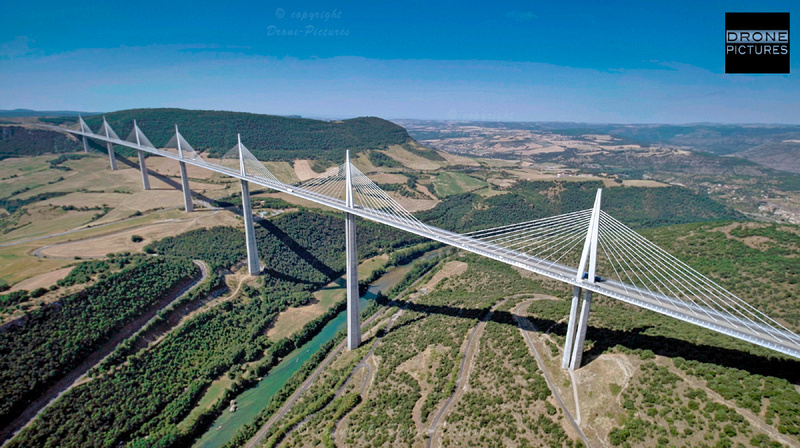